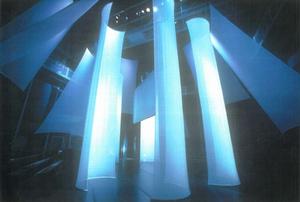 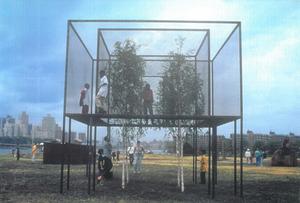 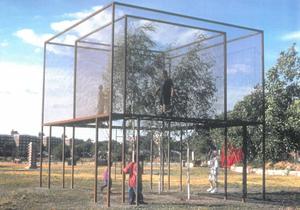 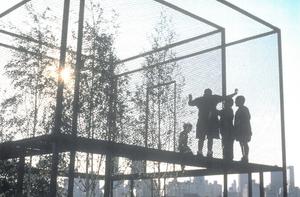 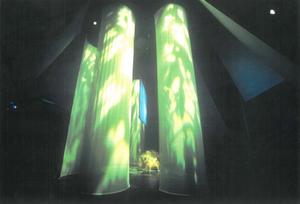 This half-hour video approached narrative filmmaking with many locations in addition to the titular aviary at the Stone Zoo in Stoneham, Massachusetts. We had to scout a swimming pool, a party scene, an ice forest, and a fishing boat. Media Lab student David Atherton and Corrado Giambalvo, an MIT senior, worked on this. We went to the wharf in Boston around 4 am when the fishermen arrived for work and found a small, and to us charming, boat. The captain agreed to let us film at night. People from Film/ Video, CAVS, and other Boston artists (some from BF/VF and MassArt) made up the crew. We showed up with lights, cameras, and sound equipment. The entire piece was filmed with Film/Video (by then part of the Media Lab) equipment. Gloriana Davenport was very supportive and allowed me to edit on 1” in their studio. The RCA Hawkeye camera was heavy, but at least one-piece, and had three glorious 1” tubes that gave a spectacular, crisp analog look. I loved those cameras and shot most of my work with them, using grainy Super 8 film as a contrast. Shooting in low light was still difficult. In the scene the male lead leaves his home and sails towards the meeting with the female lead. She was filmed underwater at the pool (the Alumni pool at MIT which has many windows allowing natural light on the water). The young German MIT student who played the role stoically kept her eyes open while submerged. Meanwhile, back at the wharf, a number of Boston artists played sleeping sailors on the boat, and others rocked it to create the illusion of being out at sea. When I did a half-hour movie shortly afterwards at the American Film Institute’s Directing Workshop for Women in LA, I learned about the highly developed structure that makes filming these types of scenes possible in the movie industry. Aviary was a miracle of the voluntary enthusiasm for art projects at the time. I wrote the music for Aviary in Tod Machover’s midi studio at the Media Lab. The sampling synth had 88 weighted keys. I asked David Atherton, a former CAVS student studying with Tod, to collect sounds for the keyboard. The orchestration was comprised of bird sounds, and other environmental sounds like wind, thunder, breath, and imaginary instruments related to the narrative. David was a Foley artist who explored both the audio and visual aspect of sound effects, and I remember asking him to make the sound of ice cracking across a pond. The production schedule meant I usually worked at night on both video editing and the soundtrack. The keyboard was so intuitive, I could realize the sounds in my head almost unconsciously. Our idea of “Aviary” blurred the boundaries between self and universe. Once, I woke up on the keyboard and found there was beautiful eerie music I had recorded from within my dream. It fit the the piece based on the idea that “thoughts have wings.”