Celebration of the first moonwalk in Central Park, New York City, 1969. ABC, CBS and NBC each constructed a fourteen-foot television screen forming a triangle of images in the center of the Sheep Meadow. The satellite signal was beamed from the Pan Am Building into Central Park and projected simultaneously, allowing thousands of people to celebrate the first step on the moon as it happened. Other sky art elements included a pyramid of searchlight beams by Forrest Meyers, a launch of helium inflated structures, projections of Buck Rogers films, a stratospheric conversation with Buckminster Fuller and a brief downpour. 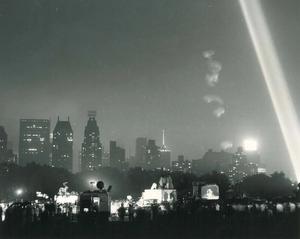