Mitch Benoff was a fellow at the MIT Center for Advanced Visual Studies. He first encountered the Center through his studies at MIT's Graduate School of Architecture, participating in the Multiple Interaction Team traveling group show. Later, he joined the Center as a fellow, and returned in the 1990s as a research affiliate and a graduate student at CAVS, receiving the Master of Science in Visual Studies degree. His practice included interior environments and design, light art, special effects for performance and motion picture, and laser art. 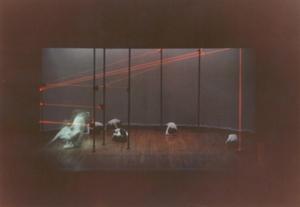 The Laser Set for Dance